Keeping It Secure With A Padlock

Home » Types Of Locks » Keeping It Secure With A Padlock

For several centuries, people all around the world have tried to come up with inventive and creative ways of keeping their personal property under some form of security. There have been various ways to secure personal items, one of the most popular forms being with a lock. One such lock that has been a great hindrance for those that are looking to steal items, and for those that are looking to protect them, is the padlock.

What Is A Padlock And Why Use One?

Originally created in England, the padlock did not become familiar to the American public until the 19th century. A padlock consists of a very simple mechanism. There is a “uÂ” shaped shackle, which is inverted into the padlock itself. There is also typically a keyhole where there is a specific key can be inserted to lock and unlock the padlock. The inside of the padlock typically works with a set of tumblers, which will manage to tumble into the proper order once the key is inserted and turned.

Padlocks have certainly seen a long range of transformation from its humble beginnings. Today, there are still the typical metal padlocks that are the most common form of padlocks. There are various reasons as to why a padlock can be used. The most common form of using a padlock is to hinder intruders from being invasive. Most people will often Â“threadÂ” the shackle of the padlock thru a chain or an alternate form of bondage. This is often typical for the front of store doors, church doors, gates, fences, and other forms of security. The shackle is them clamped back down into the base of the padlock, which will keep the items safe until the padlock is unlocked again. 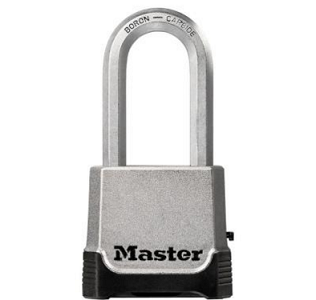 Padlocks are frequently seen as a handy means of locking up personal and important belongings. Many people like padlocks as they are not that heavy to transport from one location to another. Padlocks are often useful for people that ride bikes as they can chain their bike to a secure area and then take off with the lock and chain when they are ready to leave once more. Given the ease and portability of a padlock, it is often one of the most common forms of locks that are used for security devices. The sizes of padlocks can vary, which makes it easier for the consumer to decide how big or small of a padlock that they will need for their belongings. The prices of the padlocks can vary as well, from several dollars to well over twenty dollars, again typically depending on the size of the padlock.

There is often not enough protection that is out there that can make anyone feel totally safe or that their possessions will not be tampered with. Padlocks can often ease the minds of many users, and is perhaps one of the easier locks to work with. As long as someone can work a key and a lock, a padlock is often their best bet for a lock.