Swiping The Cards In A Key Card Lock

Home » Blogging » Swiping The Cards In A Key Card Lock

Accessing into certain areas may be difficult, due to the nature of the security. For most places, having an advanced form of a door lock is often of great importance. In many instances that need high security, such as a government office, or for higher end amenities, such as a hotel, a key card lock may often be the right solution for entry. With the help of gilbertlocksmithpros.com, here is some useful information on Key Card Locks. 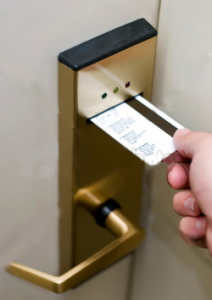 Key card locks have taken the nation by storm for many hotel chains. Places such as high security offices also have key card locks. Key card locks work in a very simple fashion. A key card is just like a credit card, by the fact that it is in the same shape of the credit card and has a black magnetic strip on the back. As much, the key cardç—´ black strip has an electronic configuration embedded in it. When the keycard is swiped thru the reading machine, it will unlock the door. The user will know if the door will become open typically when a green light is lit, and the door can be opened. Many hotel chains now offer this version of a lock. This is because when keys were once issued for hotels, they often were not returned or duplicate copies of the hotel key were made. This often made for the expensive replacement of door locks after door locks. When the creation of key card locks came into the hotel market, hotel executives were more than willing to incorporate this new system into their hotels. 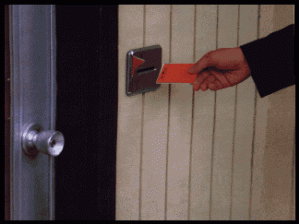 Key card locks are also implemented in high security areas. This may include government offices as well as places in a hospital that will allow staff admittance only. This is not to keep people out on the means of being cruel, but more often in the hopes to detour contagious viruses and diseases from spreading. With a key card lock, so much can be done to help the prevention of people from entering that are not allowed into restricted areas.

Once the card has been swiped thru the key card lock, the lock continues to operate as any other lock would. Once the card has been swiped, and there is an allowance for entry, the pins in the door will retract away from the springs so that the door handle can be turned and there may be an entrance thru the door once more. Key card locks are not only high tech, but makes it much easier for people to carry a card around instead of a key. Another advantage to having a key card lock is that the configuration on the card can be changed at any time, and is often done so after a guest stays in a hotel or the likes thereof.